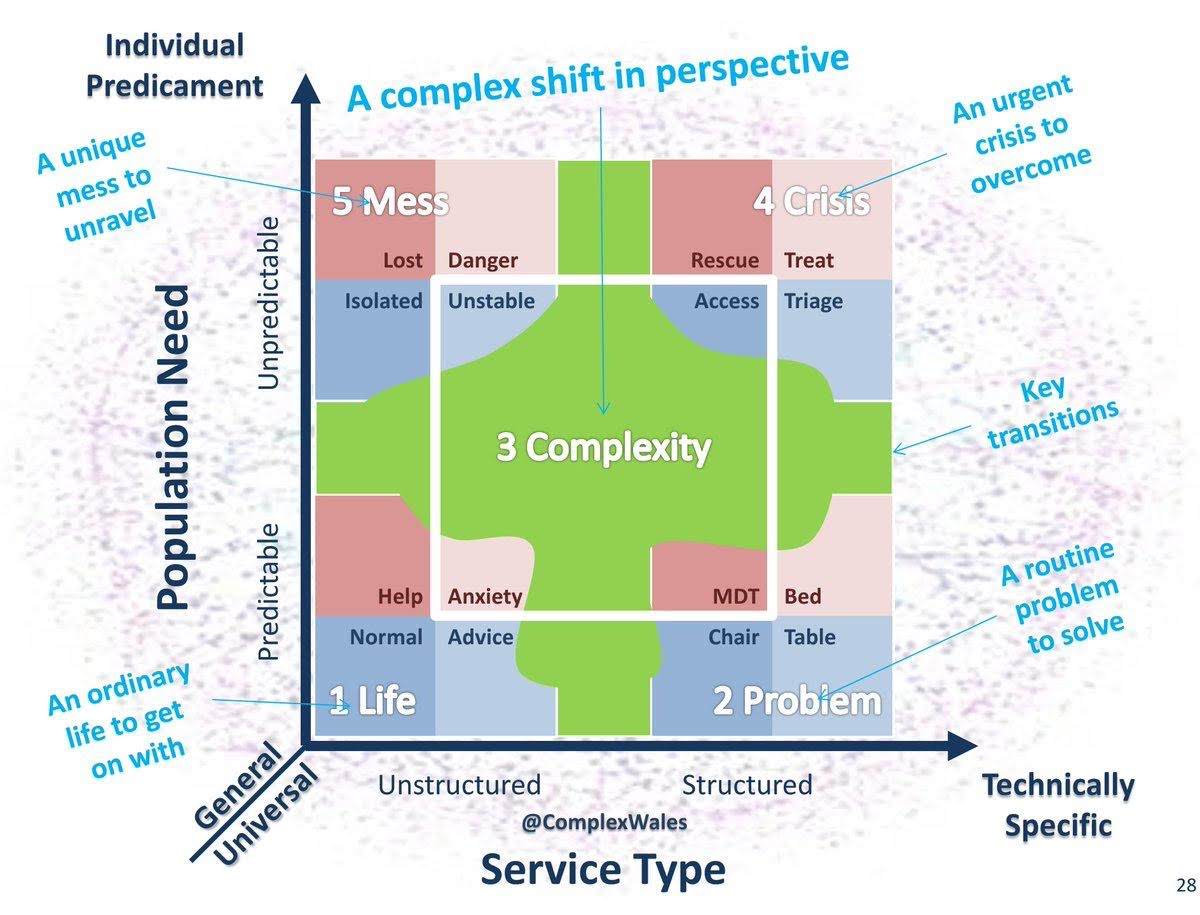 For more years than I care to mention, I’ve been embroiled in a long term programme of work exploring flows in healthcare. In simple terms, how the work and the patients move around the system. For the past two years it’s gone onto the back burner. Actually the instruction from the then Leadershipper was to bin it completely, but I just turned it down to simmer quietly.

The Leadershipper was in favour of a shiny thing that was distracting everyone like cats. There was loads of whizzy spin and appeals to authority, busily drawing all the attention – and not an inconsiderable amount of money – up a creek with no paddles. I pointed out the creek and the absence of paddles at the time, but too many people were immersed in an indiscreet absence of knowledge. It’s taken two years for the shiny thing to whither and die, while the proper work has slowly and perhaps serendipitously, reduced into a rich, luxurious sauce.

In the latest Hollywoodesque remake, the flow work is mostly called Unscheduled Care. A nebulous term that doesn’t really mean anything to anyone; not to the staff, certainly not to the patients and if truth be told, not even to those in charge of it. An awkward silence, emperors-new-clothes sort of thing.

Now that we’ve thrown the cat out and cleared the air, a few people have noticed that luxurious smell coming from the kitchen. I’ve held a few tasting sessions and that’s enough of the metaphor.

I’ve offered a way for people to conceptualise what unscheduled care and patient flow, is actually all about. I’m being very clever, drawing on a number of disciplines that converge around Complex Adaptive Systems. A pattern of relationships and methods in real time – that provide a scientific explanation of the inherent messiness of unscheduledness.

As usual I tapped into my lovely networks of interesting friends to help with the smart-arse conceptualising (see header image). In no time at all, I was firmly brought down to earth with a story that simply summed it all up. Albeit, from a long time ago, it was a real experience and one that provided my friend, with an enduring shift in perspective.

We do need an intelligent way to work in the very complex and ever changing environment currently described as Unscheduled Care. However, the good work out there in the real world is going to be small, responsive and tailored to suit the person and the situation. It will not be industrial in scale or style. We will need the best technology and the most talented staff, but when it really matters, the only long term, sustainable solution, is going to be next door and Doris shaped. Let me explain.

It’s Saturday evening and 90 year old Boris is struggling to breathe. His huge family had been with him all day and he’d had a great time, but was getting tired and as usual at this time of day, he was becoming a bit uncomfortable.

Compared to his eldest son, a younger version of the same man, Boris looked quite pale. His family were understandably worried and they decided to call the GP. While waiting for the Out of Hours cogs to turn, Boris wasn’t looking any better. The GP calls back to say “Boris is fourth on the list and I won’t be long”. With the best of intentions, the family become even more worried as Boris becomes even more blue.

In the middle of all this, Doris from next door turns up with newspapers and two cappuccinos; extra shot, extra sugar. She assumed they’d be gone by now.

The GPs not arrived and the family become really anxious when Boris stops speaking. Now in a proper flap, the family ask Doris to keep an eye on him, while they sort it all out. They move to the kitchen out of earshot and dial 999. Magic words are 90, can’t breathe and turning blue. The Ambulance is on its way. Meanwhile, the GP turns up, does the introductions and is led into the living room, which is empty!

Quietly, amidst the flap, Doris had helped Boris to put his coat over his shoulders, wrapped 2 layers of Edinburgh Woollen Mill’s finest over his knees, flung open the French doors and wheeled him into the garden. There they were, sat side by side, each with a cappuccino in a Starbucks flask with a straw.

He and Doris had been here before, many times. Together in the evening, no family about and no desire to bother anyone, with Boris struggling for breath and Doris, well … being Doris.

They’d worked out through trial and error that for Boris, a bit of cold fresh air helped. As did giving Boris something to concentrate on. In a whisper, he names the stars and explains the constellations for Doris, once again. During the war, Boris had fled from Italy and became a spotter, an RAF lookout and so he’d developed a great love for watching the night sky.

“His eyes are 20/20 and he loves them stars” said Doris “they calm him down and he’s smiling in no time”. The GP asked Boris how his advanced COPD was coming along, “just fine. Thanks. I’ve been. Out of breath. For 20 years. And. I’m getting. Quite good at it”.

Sat on the patio having a quick check up, the GP (and the Ambulanceman who turned up half way through and swapped the oxygen bottle for a full one), agreed that Boris was in good hands.

As they turned to leave Boris said, “when I go. I’ll go. Just here thanks. That’ll be fine. With me. And. What’s more. Doris gets. First dibs on the Welsh Dresser”. The fresh air and night sky, may well have been the best medicine, but the brightest star was definitely called Doris.